Pastor Elfonzo Roberson, President of the Board 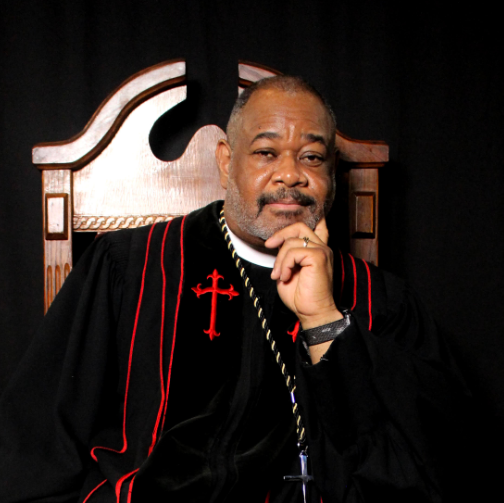 Pastor Elfonzo Roberson is the middle child of seven born to Emizie B. and  Lurlie V. Roberson. He was born at Millard Fillmore Hospital, Buffalo, NY on October 15, 1961. His early foundation in ministry came from his parents; in fact his father was a Superintendent and Pastor of Smith Chapel which later became Walnut Street C.O.G.I.C.

He is a 1980 graduate of Lafayette High School and he is a 1985 graduate of Buffalo State with a Bachelors of Science Degree in Business Administration with concentration in Business Management. He also took several courses at Medaille College and later completed a Masters of Divinity at Colgate Divinity School in Rochester, NY.

At the tender age of  13 Pastor Elfonzo Roberson realized he had a calling on his life to preach. With a great example in his life, he was led to follow in his father’s footsteps by becoming a Pastor and a Superintendent. In fact, he accepted the calling to Pastor in March 1991 and was later appointed as a Superintendent by the late Bishop G.E. Patterson in April 23, 2004 of District #2 NYW  #1 C.O.G.I.C. In 2016 Pastor Roberson was appointed as the Chairmen of the Superintendents Board of  NYW #1 by the prelate of the Jurisdiction Bishop James R. Wright Sr.

As the ministry grew on Walnut Street, God spoke and impressed upon his heart to move the ministry to its current location and rename it Miracle Christian Fellowship Center Inc. At Miracle he rightly divides the word of truth and instrumental in mentoring and teaching new ministries in the gospel. Pastor Roberson also many hours ensuring the Word of God is shared with everyone he has an opportunity to meet. This altruistic Man of God is an optimistic, unorthodox, diligent and trustworthy leader. Pastor Elfonzo Roberson is a retired Senior Chaplain for the New York State Department Correctional Services and NY State Trooper serviced for 20 years. He was responsible for several religious activities in the prison system especially the family program

This Mighty Man of Valor is made complete by his marriage to “His Heart Throb” Lady Janet L.Roberson. Pastor and Lady Roberson have been together for 27 years but have been married for 25 years. Together they have three handsome sons, Christopher, Elfonzo Jr. and Richard, but the boss and little lady of  the family is their granddaughter Zamira.